Earning a BSN Degree Opens Up a World of Possibilities

No matter your age or nursing experience level, earning a Bachelor of Science in Nursing, commonly known as a BSN degree, can be an important entry point — or next step — into the profession. The journey to a BSN can take you on many different paths.

Are you a high school student considering a career in healthcare? A four-year college or university program could be a good fit.

Maybe you are a working nurse wanting to advance your education. If so, RN to BSN programs to move your career forward abound.

Perhaps you have a bachelor’s degree in another field and need a career change. Well, an online or accelerated BSN degree program could be just what you’re looking for.

Why is a BSN degree so important?

“There’s a huge push for nurses to have a minimum of a bachelor’s degree in nursing,” said Aiken, who serves as the Claire M. Fagan Leadership Professor in Nursing, in a Nurse.com article. She also is a professor of sociology and the director of the Center for Health Outcomes and Policy Research at Penn. “While there is a strong preference in all healthcare settings for nurses to have a bachelor’s degree, many hospitals in particular prefer to hire nurses who have a BSN.”

Aiken is one of the foremost nursing education researchers in the U.S. Several of her studies have linked a BSN degree to improvements in healthcare. Among her findings is that for every 10% increase in the number of a hospital’s BSN-prepared nurses, there is a 5% to 7% decrease in risk-adjusted mortality for patients.

Several national nursing organizations also have recognized the BSN as the minimum entry point into nursing, including the American Association of Colleges of Nursing (AACN), American Organization of Nurse Executives (AONE) and the American Nurses Association (ANA).

The state of New York took the need for BSN-prepared nurses a step further in December 2017, when Gov. Andrew Cuomo signed “BSN in 10” legislation. The law calls for nurses to achieve a BSN degree within 10 years of initial licensure.

Other states have discussed similar legislation but not enacted a law as of yet.

From expanded job opportunities and higher salaries to filling a need for nurses in numerous regions of the country, nurses with BSNs can see plenty of benefits.

What does a BSN program entail?

So what exactly does a BSN program look like? They come in many shapes and sizes, but they all prepare students to become effective nursing professionals.

If you have no nursing experience but a high interest in the profession, a traditional BSN program at a four-year institution is a common path to take.

These programs can be completed on campus or online. Either way, a student can still have time to work and perform clinical hours, which means working in a healthcare setting under highly skilled professional nurses and educators.

Clinical hour requirements, depending on the state where you study, can vary widely. But no matter how many hours you complete, clinicals provide valuable hands-on experience learning from professional nurses and working directly with patients.

For working nurses and those with bachelor’s degrees in other fields, BSN degree options are just as varied.

There are RN to BSN programs that take place on site, online or in person for nurses who must continue to work. On-site programs can take place at a hospital or healthcare system to help the employer’s nurses advance their education.

Accelerated BSN programs for second-degree nurses can take as little as 11 months, according to AACN, but are an intensive experience, and working while being in this program isn’t recommended.

To meet a BSN requirement, students will go beyond hospital diploma and two-year associate degree programs to gain a deeper understanding of the profession.

A BSN degree program includes courses that are not part of other programs, such as nursing leadership, research and ethics, along with evidence-based practice and working with patient populations such as the elderly, children and those with mental health concerns.

The biggest growth in education of nursing students has happened online.

According to AACN, more than 750 RN to BSN programs exist across the country. Of those, 600+ include at least a portion of the work online.

These online programs provide students with plenty of flexibility to fit their lifestyles, which might include having a family or serving as a caregiver for older relatives.

Online BSN programs can take between 12 and 24 months to finish, mostly based on a student’s previous experience and education, along with each school’s requirements and the type of program.

Even outside of New York, where the law requires a BSN, many hospitals and healthcare facilities are requiring nurses to have a minimum of a bachelor’s degree in nursing.

Because it is a higher level of education, a BSN degree can make you a better candidate for more specialized nursing jobs.

For example, many nursing manager and director roles now seek nurses with a bachelor’s degree in nursing. The same can be said for roles such as nursing educators, case managers and clinical nurse specialists.

A BSN degree also can have an impact on your potential earnings.

According to the U.S. Bureau of Labor Statistics (BLS), the 2018 median pay for registered nurses was $71,730 per year, regardless of education level.

The 2020 Nurse.com Nurse Salary Research Report examined nurse earnings more in depth. The survey, which included more than 7,431 nurses and represented all 50 states, reported that the average salary for a nurse with a BSN degree is $73,000.

By contrast, nurses with an associate degree in nursing (ADN) – a two-year degree program commonly earned through a community college – have an average salary of $65,000.

RNs who graduated from a diploma program – which were traditionally hosted by hospitals – earned an average of $55,000.

The need for nurses

Earning a BSN degree can prepare you to immediately fill a nationwide need for more nurses.

According to a 2017 report in the Journal of Nursing Regulation, more than 1 million registered nurses will be retiring by 2030. According to famed nursing workforce researcher Peter Buerhaus, a professor at Montana State University, nursing jobs will grow by 15% by 2026, with a total need in the profession of nearly 440,000 jobs.

What does that need mean to you? Opportunities galore.

Depending on where you live, nurses are needed in very high demand.

In 2017, the federal Health Resources and Services Administration examined nursing’s need in the 22-page report, “Supply and Demand Projections for the Nursing Workforce: 2014-2030.”

“This report focuses on the inequitable distribution of nursing workforce across states,” HRSA said.

The report noted that healthcare makes up 18% of the U.S. economy, and nursing is the largest single profession in the healthcare workforce.

But some states have less of a need for RNs than others, including Texas, South Carolina and New Jersey. Even smaller needs exist in Alaska, South Dakota and Georgia.

Along with Florida, states with the highest surplus in demand were projected to be Ohio, Missouri and North Carolina.

What will you take away?

Along with a bachelor’s degree in nursing, achieving your degree will provide plenty of other benefits.

According to the 2017 Nurse.com Job Satisfaction Survey, 97% of respondents said they believe nursing makes a difference in the lives of others. Meanwhile, 81% of nurses said they would recommend the profession to others.

Of course, there are the improved earnings potential and a chance to move more quickly up the career ladder. But a BSN provides benefits such as increasing your confidence, improving your nursing skills and computer literacy, and building a like-minded community of people in your nursing classes who can help push you in school and beyond.

Nursing is one of the nation’s most revered professions.

In January 2020, nurses ranked highest among all U.S. professions in the annual Gallup poll that rates professionals based on honesty and ethics for the 18th consecutive year.

In fact, 85% of those surveyed in the latest poll said nurses have high levels of those two traits. 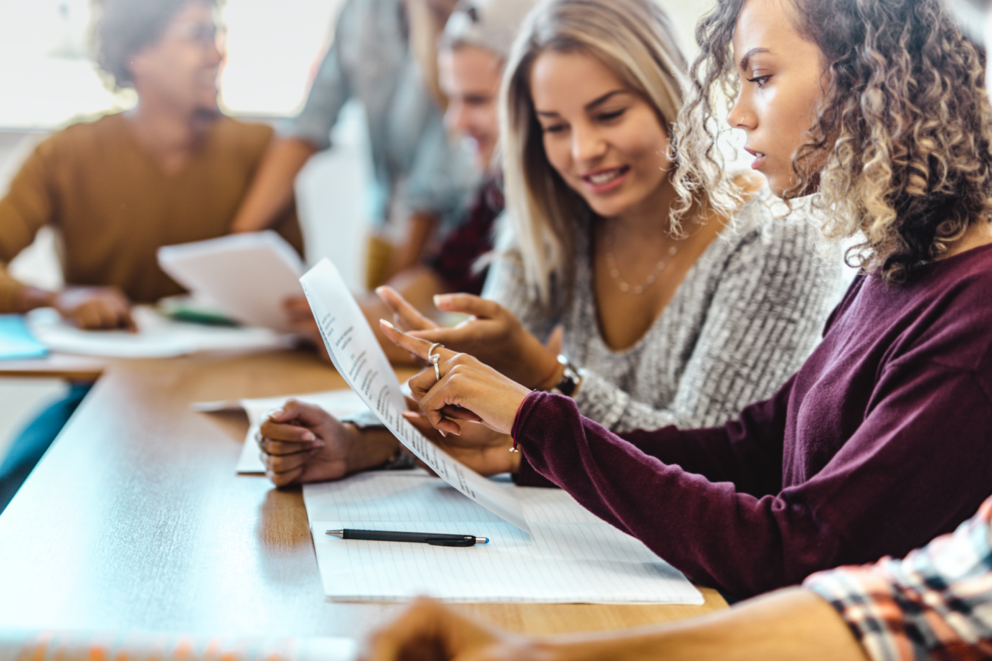 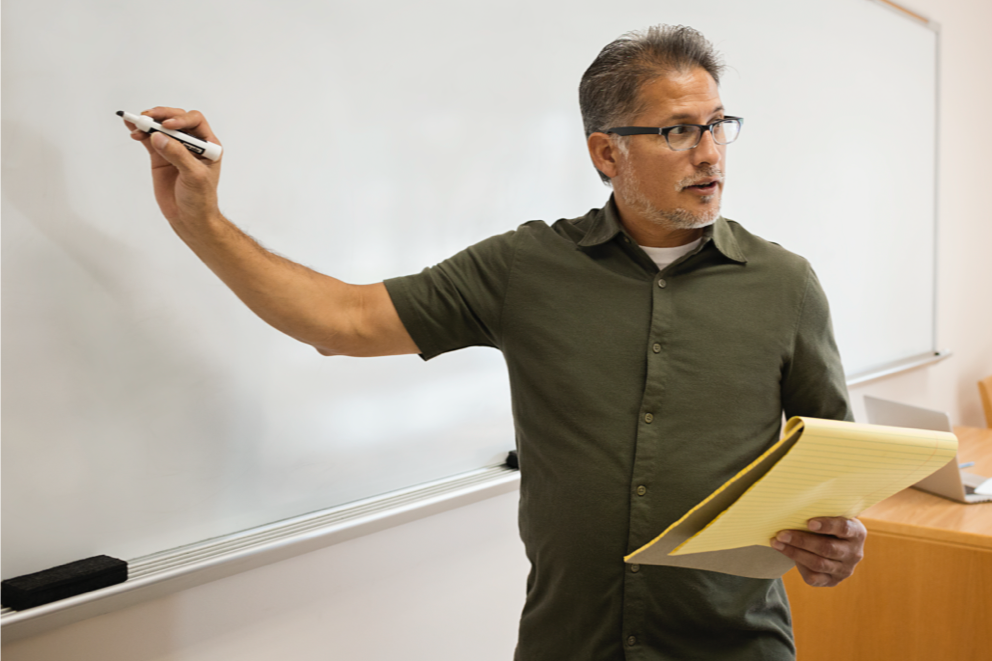 Earning a BSN Degree
The journey to a BSN can take you on many different career paths.
Read Article 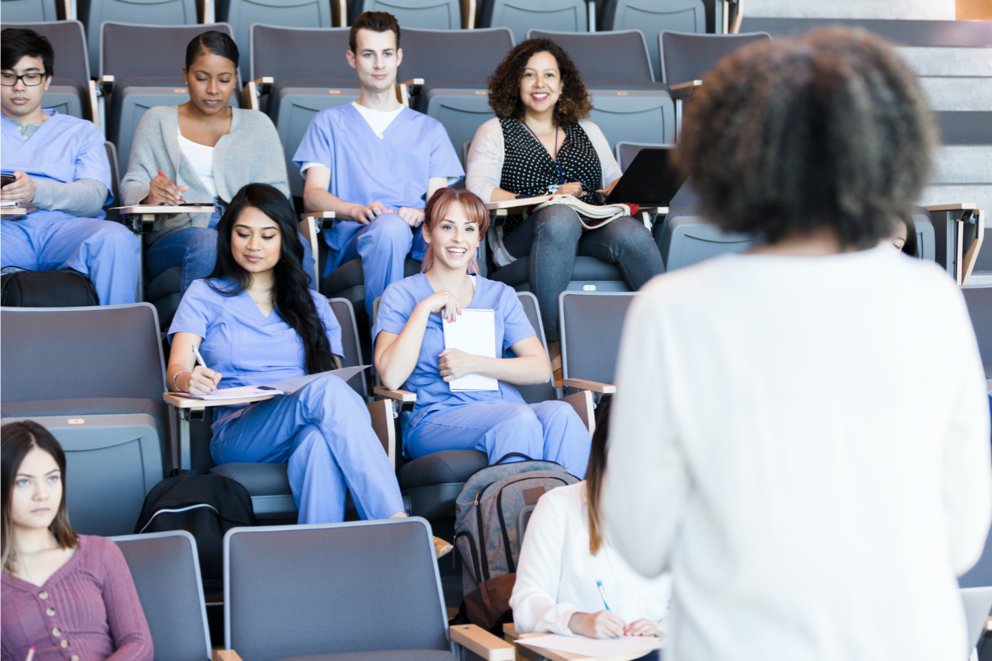 BSN Degree Worth Your Time?
A BSN can help you dig deeper into the art and science of nursing.
Read Article 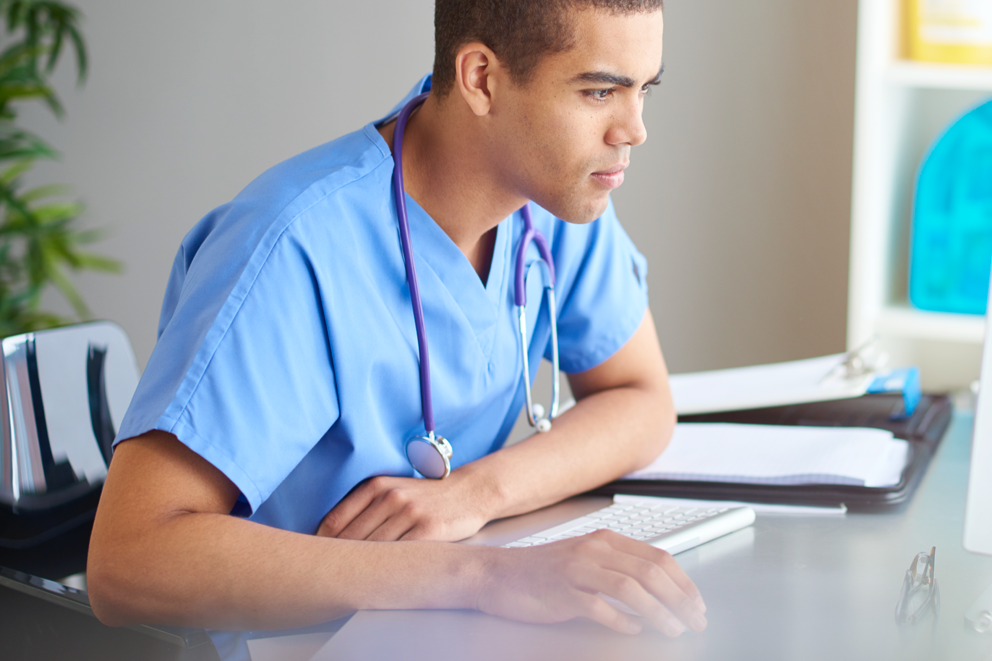 Online BSN Programs
Online programs allow you to move at a pace that fits you best.
Read Article 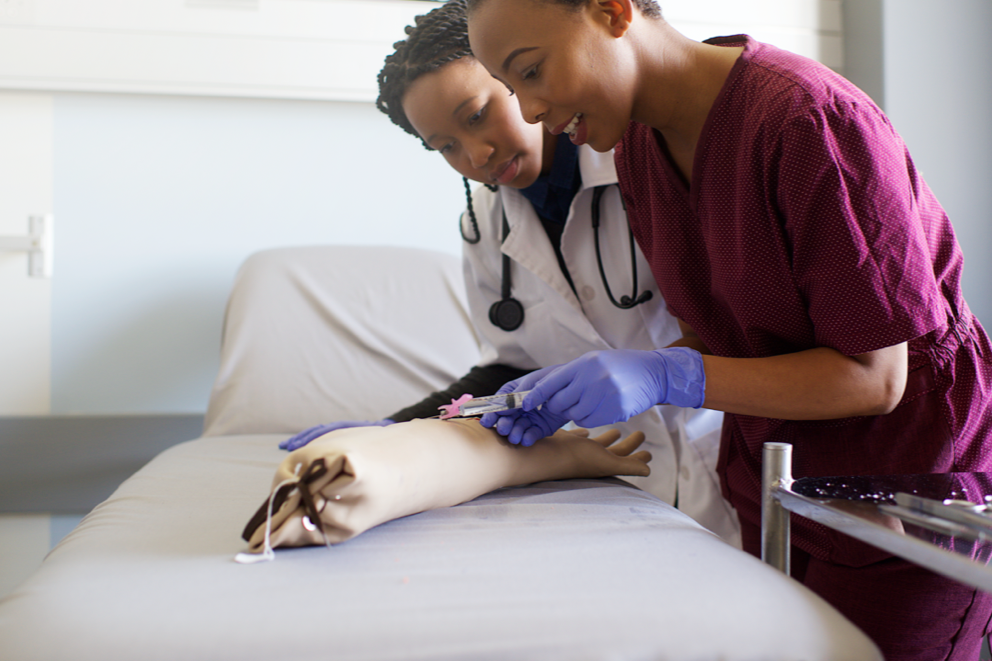 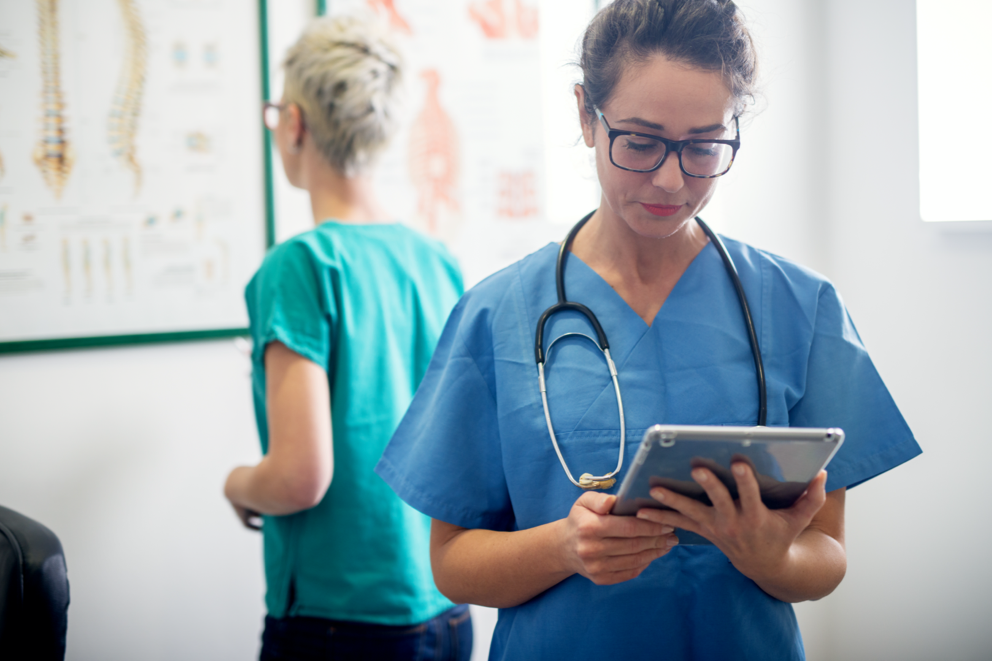 Transition from a Diploma or ADN to BSN
Gain clarity on the benefits of moving toward a BSN degree.
Read Article 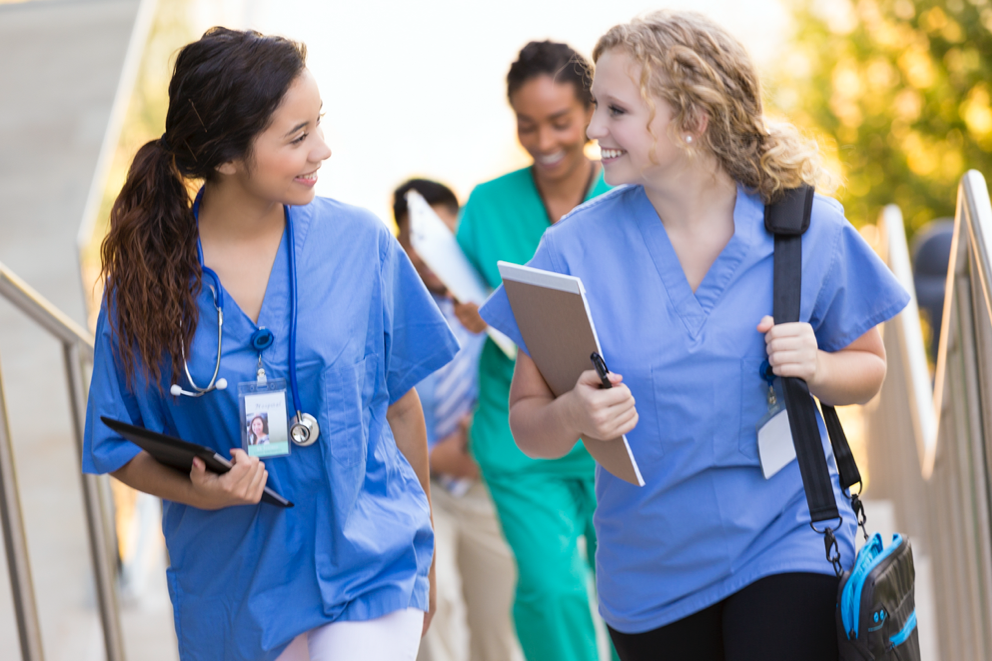