Being a nurse for the past 14 years, Rae Sherred, BSN, RN, has always felt a strong desire to help others. So, when Sherred learned about an organization planning a medical mission to provide humanitarian support to the people of Ukraine, she and other nurse volunteers like her hopped on a plane.

“Being able to help anybody is showing love for them,” said Sherred, who said her Christian faith was a major factor behind her decision to volunteer in Ukraine.

Sherred, who currently works as an emergency room nurse at Harbor-UCLA Medical Center in Torrance, California, near Los Angeles, traveled to Eastern Europe as part of a team of volunteers with the Aerial Recovery Group, a U.S.-based disaster relief organization helping Ukrainian refugees. Sherred and her team flew to Poland on March 17 and spent 20 days there and in Ukraine.

As a nurse volunteer, Sherred spent about half of her visit in the region providing medical attention and care to refugees and orphans at a train station in Lviv, Ukraine. Her team also spent several days caring for orphaned children, conducting medical assessments, and delivering medicines and medical supplies to residents. They even spent one day visiting nurses and doctors at a hospital in the capital of Kyiv.

“There were probably 10 of us on our team,” she said. “I was the only nurse who went, but we also had a lot of combat medics. The rest were special ops veterans.”

Sherred and other members of the medical team provided treatment and emotional support to Ukrainian orphans, many of whom had been rescued from buildings or homes following Russian bombing. “Many of [the orphans] had coughs and fever from being down in bomb shelters,” she said. “I did an assessment of a baby that was born in a bomb shelter.”

One of the things she remembers about her visit to the hospital in Kyiv was the lack of basic medical supplies, such as gauze, medicine, insulin, and antibiotics. She also said the hospital was only able to use the basement and first two floors of the eight-story building for fear of Russian bombardment. Still, she was overwhelmed by the resilience and strength of the medical staff there and the Ukrainian people in general.

“It was mind-opening to see how little they had (in terms of supplies), but it was also inspiring how much strength and passion they had,” she said. “They were super strong and super proud to be Ukrainian.”

During their visits to other Ukrainian towns, Sherred said the Ukrainian people were always very appreciative of any medical supplies or assistance the team provided.

She remembers one occasion in particular when she delivered a small supply of tourniquets used to stop bleeding in injured soldiers and civilians to a medical clinic in the city of Dnipro.

“The head lady there started crying and gave me the biggest hug and said this is going to save a life,” she said. “They were so thankful for any little bit of help you could give. They love their people and they want to stop what’s happening.”

Sherred originally got the idea of going to Ukraine after learning about and contacting a small group of Arizona nurses and medical professionals who had volunteered at a Ukrainian refugee center in Poland.

In that group was Janet Semenova-Hornstein, PNP, RN, a Scottsdale pediatric nurse practitioner who was originally from Uzbekistan in the former Soviet Union before her family moved to the United States when she was a child. Joining Semenova-Hornstein were Svetlana Reznikova-Steinway, MD, an emergency room physician in Mesa and native of Ukraine;  Carla Stark, RN, an oncology nurse in Scottsdale; and Cheryl Macy, MD, an emergency room physician in Phoenix. 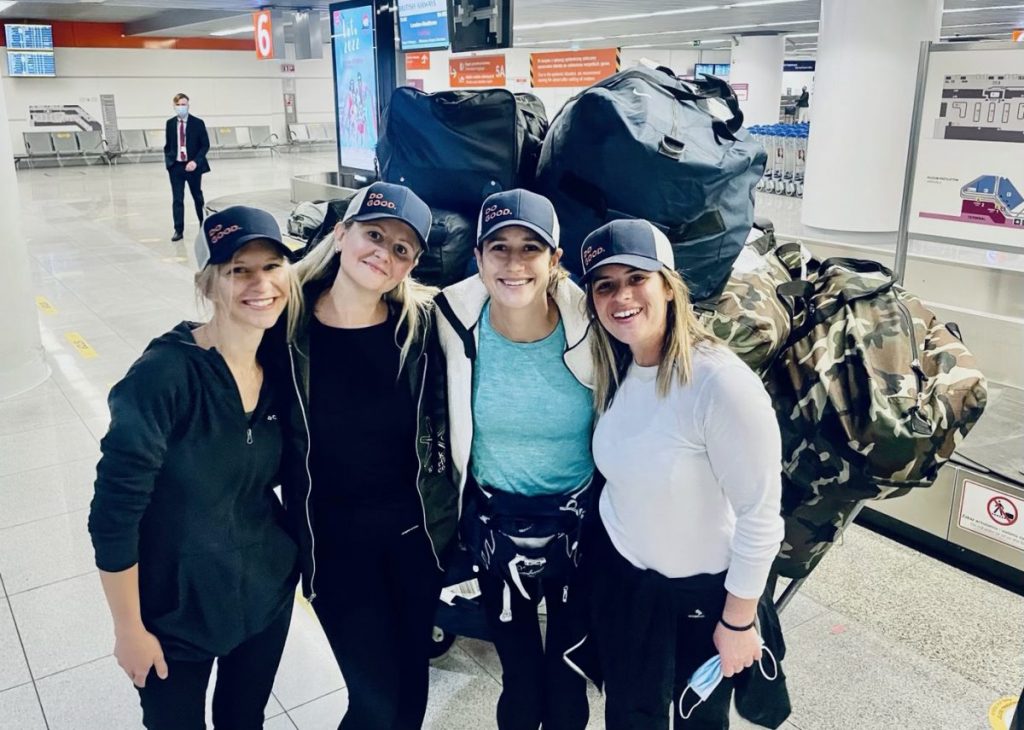 A group of Arizona physicians and nurses volunteered in March for a medical mission to help Ukrainian refugees in Poland and Ukraine. Pictured, from left, are Cheryl Macy, MD, an emergency room physician in Phoenix; Svetlana Reznikova-Steinway, MD, an emergency room physician in Mesa; Janet Semenova-Hornstein, PNP, RN, a pediatric nurse practitioner in Scottsdale; and Carla Stark, RN, an oncology nurse in Scottsdale.

Shortly after the Ukraine war began, the group of friends immediately started collecting donations of medical supplies and medications to deliver to Ukraine but soon decided that wasn’t enough. With the help of the Aerial Recovery Group, the four women boarded a flight to Poland in early March, bringing the 800 pounds of medical supplies they had raised with them on a volunteer medical mission to help Ukrainian refugees.

“Our only motivation is we wanted to help, we wanted to do more,” Stark said. “We all felt we had a set of skills to offer and that we could be useful in different ways.”

“I think we all sort of saw a bit of ourselves in the people of Ukraine,” said Stark, who was born in raised in South Africa before her family moved to the United States. “It’s hard not to feel empathy and want to help when something this horrible is going on.”

For more than a week, Stark and her friends were stationed at a refugee center in Medyka, Poland, near the Ukrainian border, where thousands of refugees visited. Semenova-Hornstein also spent a couple of days in Lviv, Ukraine, providing medical assessment and care for orphaned children.

“For us, it primarily involved providing a lot of emotional support,” she said. “A lot of the refugees had nausea, headaches, and anxiety. Things were very stressful for them.”

Many of the refugees also left their medications at their homes when they fled Ukraine, so she and her other friends also visited local pharmacies in the region to buy medicine and other supplies for the refugee center. They also assembled first aid kits to be delivered to the soldiers fighting in Ukraine.

“I think with all of us being in the medical profession, we had a better understanding of what people were going through,” Stark said. “It’s helpful because we understood what they needed. You have to have empathy. You see things that most people don’t see, and you have to have the ability to handle things emotionally that most people can’t.”

Through the darkness of the war, Stark saw many positives, including the resilience of the Ukrainian people and the many volunteers from around the world who came to the refugee center to help. “There’s so much negativity in the world, and yet people want to help,” she said.

As a wife and mother of two children, Stark does not know if she will be able to go overseas as a nurse volunteer again, but she and her friends continue to collect donations of medical supplies and monetary donations to send to Ukraine.

Sherred admits she feels conflicting emotions of hope and sadness when she thinks of the courage of the Ukrainian people and the help that’s being provided in the face of a devastating war.

“When people ask me about it, I say it was beautiful, sad, and heartbreaking all in one,” she said. “There are so many beautiful things that people are doing over there and so many things that would break your heart. There were so many emotions all in one.”

Still, Sherred said her experience as a nurse volunteer was definitely worth it and she hopes to return to Ukraine, perhaps sometimes in May. She also believes her experience working as an emergency room nurse in a large urban city, where she often sees a lot of traumatic injuries, prepared her for the volunteer mission in Ukraine.

“I usually work in trauma centers, and I’ve seen a lot,” she said. “I think being an emergency room nurse definitely prepared me for what I needed to do over there.”

Find your next career opportunity with Nurse.com Jobs.

About the Author: John Roszkowski

John Roszkowski is a freelance writer.